The End of Democracy 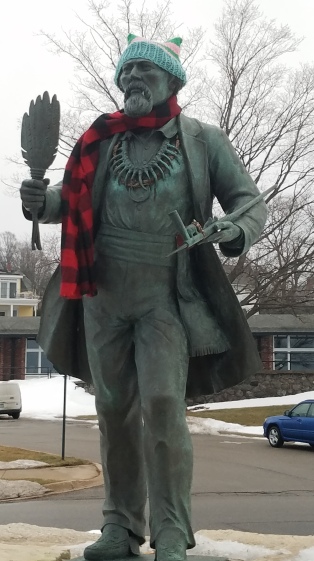 Chief Petoskey might agree that democracy is a failure.

It may be my bad luck, and my generation’s bad luck, to be alive at a time when we are witnessing the limits of democracy. We’ve had a good run–over two hundred years now–but it may be time to call it a day and start over with some new form of government.

I suppose I am as patriotic as anyone. There are two times in my life when I felt tears well up in my eyes solely because of my pride in being an American. One was after a three-week trip to Iceland, Scotland, and England in 1996, when I returned with my young family to Houston Intercontinental Airport. Waiting in customs, I noticed a babble of languages, and looking around, I saw myself surrounded by people of color, dressed in a variety of ways, many with headscarves or turbans. At that time, it was easy to imagine that these people, if not Americans themselves, would be welcomed as visitors to the United States, or perhaps as potential citizens. That was enough to make me sentimental about the diversity of my country, to be thankful to live in a country that valued all people.

(I will pass over for now the very real possibility—indeed, the near certainty—that this was simply a fiction, even at that time. My belief, however, was real enough to draw tears of pride from my eyes, which of course I quickly wiped away.)

The second time I became emotional with pride in my country was in about 2003 or 2004, when, as a union member from the local community college I stood in solidarity with nurses who were striking at the hospital. I was proud to do so—it is our right as Americans to stand and protest, as so many of us have recently found out. I was proud to be a citizen of a country that allows its citizens to congregate for such a purpose, despite the inconveniences that may be caused by it.

In the last couple of years, I’ve seen protests, but I haven’t taken part in them. I’ve supported them, but I have not been able to make myself participate in them. During the Women’s March, I stayed home, dissolved into a teary mess most of the day. But these were not tears of pride. Perhaps there was some pride mixed in, and admiration for the women who dedicated themselves to the cause, but there was also a feeling of profound despair at the need for such a march. It was the same thing with the March for Our Lives. What a beautiful expression of solidarity, but why should the people of this country need to march in order to protect our children, in order to stand up against an organization that should have no part in our electoral process, to protest the very electoral process that has been shown to be corrupt—not only because of foreign interference, but because of outrageously large campaign donations that fund and sway our elected officials?

Don’t get me wrong. To those of you who are participating in these movements, I want to say that I admire and love you for what you are doing. Yet I cannot help but feel that the need for such movements marks the decline of democracy, the end of this glorious experiment in civic rule that began over 200 years ago.

(Again, I will pass over the fact that this glorious experiment probably started, as so many others have, with the desire for personal gain on the part of the architects of the experiment.)

Democracy cannot work when it is corrupted by the desire for financial gain. It cannot work when the electorate is divided along the lines of hard-held, incontestable beliefs that brook no argument or discussion. It cannot work when our elected officials are, like the people who elect them, small-minded, fearful, and utterly dependent on large corporations who try to direct every facet of their lives and thoughts and are free to do so if they spend enough money on licit and illicit media campaigns.

Recently, retired Supreme Court Justice John Paul Stevens called for the repeal of the Second Amendment. It may in fact be time for such a step. But I fear it may be time for a more drastic step: to admit that our democracy, such as it is, has failed, and that it is time to go back to the drawing board to find a new, more equitable, more humane way of living together in this world that we have created for ourselves.

Tagged as capitalism, culture, limits of democracy, March for our Lives, plutocracy, Women's March on Washington